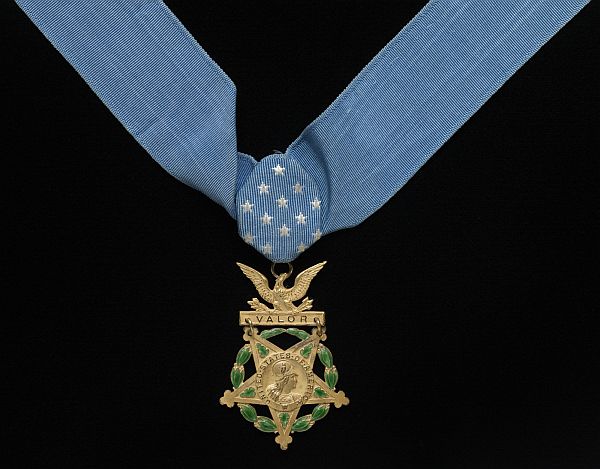 When the war books were closed at the end of World War II, the Medal of Honor the military’s highest award was bestowed on 432 soldiers. But not one was given to any of the more than one million African-Americans who served in that war. It took an internal Army investigation, not launched until 1994, to find out why … and to eventually right the wrong. More than a half century after the end of World War II, in 1997, seven African-Americans were finally awarded the Medal of Honor in a White House ceremony. In 1994, the Army finally took notice and commissioned a research team at Shaw University in Raleigh, NC to look at the situation. Their investigations revealed seven tales of uncommon valor that deserved the award, and blew the lid off a long-standing, high-level conspiracy within the U.S. government to obscure the contributions of African-American soldiers and keep them from public record.

For conspicuous gallantry and intrepidity at the risk of his life above and beyond the call of duty:First Lieutenant Vernon J. Baker distinguished himself by extraordinary heroism in action on 5 and 6 April 1945. At 0500 hours on 5 April 1945, Lieutenant Baker advanced at the head of his weapons platoon, along with Company C’s three rifle platoons, towards their objective; Castle Aghinolfi – a German mountain strong point on the high ground just east of the coastal highway and about two miles from the 370th infantry Regiment’s line of departure. Moving more rapidly than the rest of the company, Lieutenant Baker and about 25 men reached the south side of a draw some 250 yards from the castle within two hours. In reconnoitering for a suitable position to set up a machine gun, Lieutenant Baker observed two cylindrical objects pointing out of a slit in a mount at the edge of a hill. Crawling up and under the opening, he stuck his M-1 into the slit and emptied the clip, killing the observation post’s two occupants. Moving to another position in the same area, Lieutenant Baker stumbled upon a well-camouflaged machine gun nest, the crew of which was eating breakfast. He shot and killed both enemy soldiers. After Captain John F. Runyon, Company C’s Commander joined the group, a German soldier appeared from the draw and hurled a grenade which failed to explode. Lieutenant Baker shot the enemy soldier twice as he tried to flee. Lieutenant Baker then went down into the draw alone. There he blasted open the concealed entrance of another dugout with a hand grenade, shot one German soldier who emerged after the explosion, tossed another grenade into the dugout and entered firing his sub-machine gun, killing two more Germans. As Lieutenant Baker climbed back out of the draw, enemy machine gun and mortar fire began to inflict heavy casualties among the group of 25 soldiers, killing or wounding about two-thirds of them. When expected reinforcements did not arrive, Captain Runyon ordered a withdrawal in two groups. Lieutenant Baker volunteered to cover the withdrawal of the first group, which consisted mostly of walking wounded, and to remain to assist in the evacuation of the more seriously wounded. During the second group’s withdrawal, Lieutenant Baker, supported by covering fire from one of his platoon members, destroyed two machine gun positions (previously bypassed during the assault) with hand grenades. In all, Lieutenant Baker accounted for nine enemy dead soldiers, elimination of three machine gun positions, an observation post, and a dugout. On the following night, Lieutenant Baker voluntary led a battalion advance through enemy mine fields and heavy fire toward the division objective. Lieutenant Baker’s fighting spirit and daring leadership were an inspiration to his men and exemplify the highest traditions of the military service.

For conspicuous gallantry and intrepidity at the risk of his life above and beyond the call of duty: First Lieutenant John R. Fox distinguished himself by extraordinary heroism at the risk of his own life on 26 December 1944 in the Serchio River Valley Sector, in the vicinity of Sommocolonia, Italy. Lieutenant Fox was a member of Cannon Company, 366th Infantry, 92d Infantry Division, acting as a forward observer, while attached to the 598th Field Artillery Battalion. Christmas Day in the Serchio Valley was spent in positions which had been occupied for some weeks. During Christmas night, there was a gradual influx of enemy soldiers in civilian clothes and by early morning the town was largely in enemy hands. An organized attack by uniformed German formations was launched around 0400 hours, 26 December 1944. Reports were received that the area was being heavily shelled by everything the Germans had, and although most of the U.S. infantry forces withdrew from the town, Lieutenant Fox and members of his observer party remained behind on the second floor of a house, directing defensive fires. Lieutenant Fox reported at 0800 hours that the Germans were in the streets and attacking in strength. He called for artillery fire increasingly close to his own position. He told his battalion commander, “That was just where I wanted it. Bring it in 60 yards!” His commander protested that there was a heavy barrage in the area and the bombardment would be too close. Lieutenant Fox gave his adjustment, requesting that the barrage be fired. The distance was cut in half. The Germans continued to press forward in large numbers, surrounding the position. Lieutenant Fox again called for artillery fire with the commander protesting again, stating, “Fox, that will be on you!” The last communication from Lieutenant Fox was, “Fire It! There’s more of them than there are of us. Give them hell!” The bodies of Lieutenant Fox and his party were found in the vicinity of his position when his position was taken. This action, by Lieutenant Fox, at the cost of his own life, inflicted heavy casualties, causing the deaths of approximately 100 German soldiers, thereby delaying the advance of the enemy until infantry and artillery units could by reorganized to meet the attack. Lieutenant Fox’s extraordinarily valorous actions exemplify the highest traditions of the military service.

For conspicuous gallantry and intrepidity at the risk of his life above and beyond the call of duty: Then Lieutenant Charles L.Thomas distinguished himself by extraordinary heroism in action on 14 December 1944. One platoon of Company C, 614th Tank Destroyer Battalion, was designated as the lead element in a task force formed to storm and capture the village of Climbach, France. Lieutenant Thomas, the Commanding Officer of Company C, realized, with the obscurity of information regarding the enemy and a complete lack of reconnaissance, the mission would be an extremely dangerous one. Fully cognizant of the danger, Lieutenant Thomas volunteered to command the selected platoon of his company and ride in the column’s leading vehicle – a highly maneuverable, but equally vulnerable, M-20 scout car. Lieutenant Thomas knew that if there was a concentration of enemy armor in the village, as was believed, he would absorb the initial shock of the first enemy resistance. The task force left Preuschdorf, France, at 1023 hours, and proceeded to advance in column toward Climbach. Lieutenant Thomas in his scout car stayed well in front of the column. At 1400 hours, upon reaching the high ground southeast of the village, Lieutenant Thomas experienced initial contact with the enemy. As his scout car advanced to an exposed position on the heights, he received intense direct fire from enemy artillery, self-propelled guns, and small arms at a range of seven hundred yards. The first burst of hostile fire disabled the scout car and severely wounded Lieutenant Thomas. He immediately signaled the column to halt. Before leaving the wrecked vehicle, Lieutenant Thomas and the crew found themselves subjected to a veritable hail of enemy fire. Lieutenant Thomas received multiple gunshot wounds in his chest, legs, and left arm. In spite of the intense pain caused by his wounds, Lieutenant Thomas ordered and directed the dispersion and emplacement of his first two antitank guns. In a few minutes these guns were effectively returning the enemy fire. Realizing that it would be impossible for him to remain in command of the platoon because of his injuries, Lieutenant Thomas then signaled for the platoon commander to join him. Lieutenant Thomas then thoroughly oriented him as to the enemy gun positions, his ammunition status, and the general situation. Although fully cognizant of the probable drastic consequences of not receiving prompt medical attention, Lieutenant Thomas refused evacuation until he felt certain that his junior officer was in full control of the situation. Only then did Lieutenant Thomas allow his evacuation to the rear. Throughout the action, Lieutenant Thomas displayed magnificent personal courage and a complete disregard for his own safety. His extraordinary heroism spurred the soldiers of the platoon to a fierce determination to triumph, and resulted in a mass display of heroism by them. Lieutenant Thomas’ intrepid actions throughout the operation reflect the highest traditions of military service.

For conspicuous gallantry and intrepidity at the risk of his life above and beyond the call of duty: Private George Watson distinguished himself by extraordinary heroism on 8 March 1943, while serving in the Pacific Command with the 2d Battalion, 29th Quartermaster Regiment, near Porlock Harbor, New Guinea. Private Watson was onboard a troop ship, the Dutch Steamer (United States Army Transport) Jacob, when it was attacked and hit by enemy bombers. Before it sank, the ship was abandoned. Private Watson, instead of seeking to save himself, remained in deep waters long enough to assist several soldiers who could not swim to reach the safety of a life raft. This heroic action, which subsequently cost him his life, resulted in saving the lives of several of his comrades. Weakened by continuous physical exertion and overcome by muscular fatigue, Private Watson drowned when the suction of the sinking ship dragged him beneath the surface of the swirling waters. His demonstrated bravery and unselfish act set in motion a train of compelling events that finally led to American victory in the Pacific. Private Watson’s extraordinary valorous actions, his daring and inspiring leadership, and his self-sacrificing devotion to his fellow man exemplify the finest traditions of military service.